Α good hernia repair, should cover 1st the patient for the rest of his life, nο matter what his age at the time of the operation. The surgeon must bear in mind this responsibility. Α 1982 report showed that almost 6% of recurrences occurred during first postoperative month, 39% during the first year after primary repair, and 24% occurred later than 10 years after  the operation. The Shouldice Hospital has reported that late recurrence is not uncommon in cases followed for 10 to 40 years. As the causes of early recurrence after hernia repair were eliminated (faulty technique, ignorance of the functional anatomy and physiology of the abdominal wall, repair with tension, the use of incorrect material, and infections), it became apparent that with the finest technique and materials and the best intentions, a percentage of hernias will recur over the because of factors beyond the control of the surgeon. These are mainly the natural weakening of the tissues and deterioration of body fitness with time and aging, ‘increased adiposity, raised intra-abdominal pressure owning to chronic cough, constipation, and obstructive diseases of the urinary bladder. It was realized that some form of reinforcement was needed to overcome the problems of aging scar tissue and of muscles and tendons approximated by sutures, especially in direct hernia repair.

A variety of natural and foreign materials were used for this reinforcement, but with little success, until the advent of strong, smooth, resistant, and pliable monofilament nylon. The principle of the nylon darn operation for the repair of inguinal hernia is to reinforce the weakened or torn posterior wall of the inguinal canal with the muscles of the musculoaponeurotic arch, as well as with a simple lattice work of monofilament nylon suture under no tension, on which is laid a buttress of fibrous tissue, without the normal tissues being torn or necrosed. The nylon sutures are anchored into strong, healthy tissues far from the area of herniation. The nylon darn solves the problem of early recurrence since the nylon lattice will hold the area intact for the first year, until the natural connective tissue collagen scar matures to its full strength. However, the muscle and scar tissue is not able to withstand the constant wear and tear of repeated stress over many years. As they fail, the nylon, which is practically indestructible in human tissues, will once more come into its own and will maintain the integrity of the repair for many years, until the end of the patient’s life.

The technical details of the operation were described in back in the post 2nd war era but and more recently 1-3. The incision and meticulous dissection and preparation of the tissues are as described previously. The dissection before the darn is the same as in every type of repair Please see the steps in the video and as always say “surgery is for stupid even you can do it”. (I was told that in the US)

Up tο this stage, the procedure constitutes a tissue repair and its strength depends οn that of the tissues used. If no more is done, some cases will develop early recurrence and others late recurrence. This repair has the advantage of closing the rent in the transversalis fascia and of tightening the internal ring and providing a thick musculoaponeurotic barrier for the posterior wall of the canal. Ιt also provides a smooth, flat bed on which tο lay the darn. 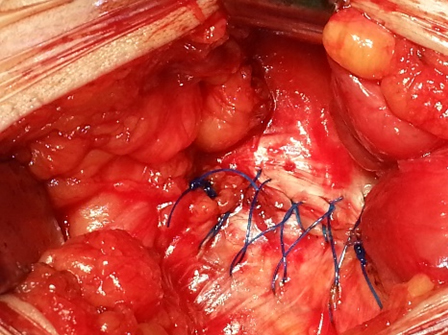 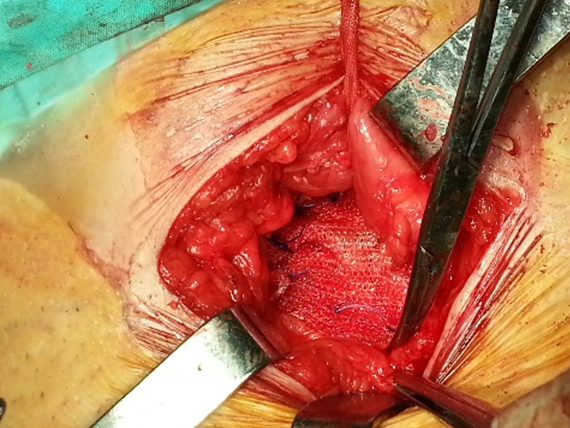 The monofilament nylon thread must be thick enough not to cut through the tissues but not so thick as to be unpliable and difficult to handle. Large mass bites of full-thickness tissue must be taken to hold the sutures. The stitches should not be as close as to cause ischemia of the tissues between them, but not so far apart as to allow extrusion of abdominal contents. The sutures in the conjoined tendon must be carefully placed in good, healthy tissue at a distance from the stretched and attenuated muscles around the hernia. The smooth nylon slide in the tissues and adjust the tension οn individual sutures during relaxation and exercise.

I have done more than 300 cases of darn repair in my practice and a respectable number were recurrences and I have seen only one recurrence (there may be more but they did not come to me): The case I did in my former boss with a left sliding inguinal hernia were the sigmoid colon was inside and was difficult to control the inner ring but he also did not follow any orders (the 3rd post op day he did a Whipple procedure). After a couple of years I operated again him for right hernia and I went to see what was going on the left side and I saw everything fine expect that fat was coming out from the inner ring, and I corrected it inserting a plug mesh (fig 3). So I recommend to use all the ways to fix any hernia but it is for the pts benefit to have a darn hernia repair and use the mesh selectively (when it needed) and please avoid them in young male pts. 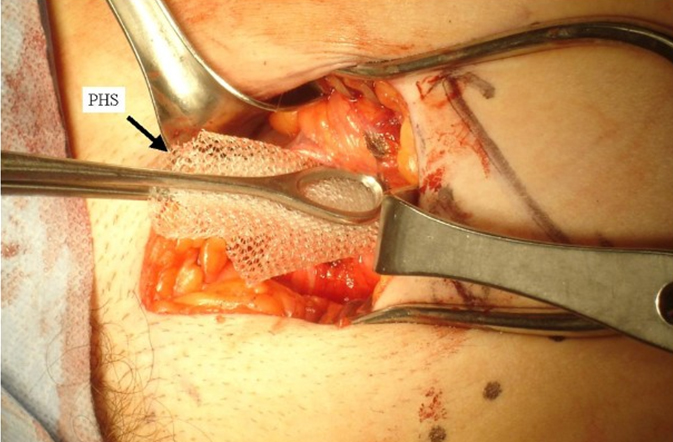 This chapter come to live because all my new residents did not how to prepare themselves for a darn hernia repair and there are no other sources.